I’m going through the summer schedule today, and it looks like it’s a busy one. Usability testing, video scripting and vetting, data analysis, conference planning, presentation creation, lots and lots of article writing, and bribing journal editors to publish me after writing said articles.

My job schedule aside, I have some plans for http://yobj.net during this summer as well. First, I’ll probably be tinkering around with the blog code so it can be nice and validate or come very close to validating so there won’t be many accessibility issues. The front page may see some more content and maybe even a little CSS, but that depends on my mood at the moment.

The major project that I have planned is to create a comprehensive website dedicated to library technical services. This site will have three aims:

I should have some form of this website up and running by the end of summer, right when the students come back. 😉 If any of you would be interested in helping with this project, leave a comment below or email me at b.yoose (AT) gmail (DOT) com.

AUTOCAT never ceases to entertain me…

A thread about cataloging and cataloger training in library school stated after someone offered their opinion about the ALA Task Force on Library Education report. This thread went down the very worn path of the theory v. practice argument until a paraprofessional added a (very) underrepresented perspective in the current cataloging skills and training debate. She has the experience, does professional development, enjoys what she does, and (the most important point) she is training the MLS Librarian in cataloging.

I guarantee you that the paraprofessionals training MLS folk situations happen more than most MLS folk like to admit. I have gone through some cataloging training with a very knowledgeable paraprofessional at my current position. She has been cataloging and doing authority work for years, while I have only cataloged for about a year when I was hired. I’m a better cataloger because I had a knowledgeable teacher who didn’t mind teaching a librarian. 😉

“Why are you refusing to earn an MLIS? There are several online programs available, and Emory probably has some kind of tuition reimbursement available for job related courses. We really do teach things that you don’t learn on the job.” – Library School Professor

While the above statement raised an eyebrow, the following statements from a particular cataloger raised both at the same time:

If you want to alienate the part of your library staff that run the place, repeat the above. The library field has been in the throes of questioning the professionalism of librarianship for a long time. The movement of paraprofessionals taking over duties previously done by librarians in Technical Services added fuel to the professionalism fire. The above cataloger indicates a worldview of us v. them (Librarians v. “catalogers”). If the degreed librarians don’t stand up against paraprofessionals taking their duties, the future for Librarians in TS is dim.

Then again, what makes a librarian a librarian? Is it the day to day duties she performs? If librarians were librarians based on those duties, then it would serve us right to be booted out the door. Paraprofessionals are cheaper for these duties, and I have no problem with that. Do ideas and the drive to innovate make a librarian? Sure, but then again, does this mean that paraprofessionals do not have ideas and a desire for innovation themselves? Heck, where would that leave all the non-library techies who build new discovery platforms?

If administrators are not looking at expensive degreed librarians for positions, then the degreed librarians need to take it upon themselves to prove to the admins that they are valuable. Saying that you can catalog is one thing – anyone can catalog, given a few training sessions. You are not your duties. You are your ideas, your spirit of innovation, your aspirations. Why should they hire you?

For those of you who have been following the OCLC policy change situation (if not, I recommend the OCLC Policy Change page on the Code4Lib wiki to get yourself acquainted), the Review Board of Shared Data Creation and Stewardship chair presented to the Members Council on May 18th. In the preliminary report, the review board recommends OCLC to  withdraw the proposed policy and start from square one, this time allowing for participation from the OCLC membership masses and more transparency.

While many in the blogosphere celebrated the announcement, the important thing to keep in mind is that this is a recommendation, and a preliminary one at that. The final report could have the board recommending that OCLC should do something completely different. In addition, the board’s recommendations are just that – recommendations. OCLC is not bound to the board. Then again, if OCLC blatantly disregards the recommendations, then the semi-quiet grumblings questioning OCLC’s “membership driven” structure will become near to a deafening roar. That is dependent if OCLC still wants to be a “membership driven” organization, of course. With their entry into the ILS market, OCLC takes yet another step towards commercial vendorship. It is true that OCLC did have the Ohio legislature give it a special non-profit status; however, it may come to a point in time where OCLC decides to shed the special status and take its place with the other for-profit vendors. Where would that leave the member-created database, if OCLC goes formally for-profit?

For those of you who could not make it to code4lib 2009, the videos are now online:

I recommend the following:

What We Talk About When We Talk About FRBR by Jody Schneider and William Denton. This talk was by far the best talk about FRBR I have heard, and I have sat through many, many FRBR talks. If you are still unclear about FRBR (which, if my assumption is correct, the majority of you out there), this talk will definitely clear some of the fog around FRBR.

LibX 2.0 by Godmar Back. LibX has been around for a while, and if your library doesn’t have this app, place this on the top of your to-do list. If you do have LibX (yay!) this presentation will get your idea engine running.

A New Platform for Open Data – Introducing ‡biblios.net Web Services by Joshua Ferraro. This is the mandatory LibLime mention.

The lightning talks are also something to check out. Who knows, you just might see the author presenting somewhere in one of those videos…

I dedicate this non-blog to St. Minutia, patron saint of catalogers. Please click on St. Minutia’s picture for more information about her. 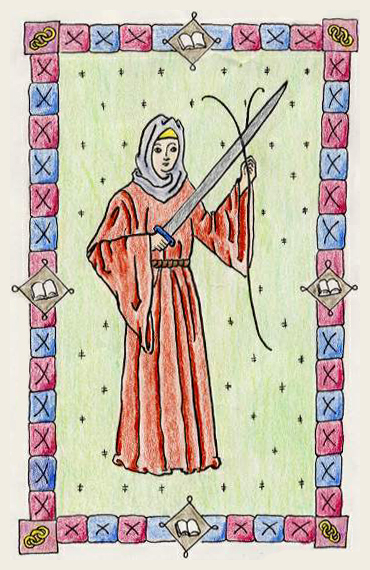 Buy Me a Tea

Ideally a book would have no order to it, and the reader would have to discover his own. --- Mark Twain